Pirates of the Caribbean Extras Wikia
Register
Don't have an account?
Sign In
Advertisement
in: Articles known by a nickname, Individuals, Blown up,
and 7 more

1708[2], perished during the explosion of the Silent Mary within the Devil's Triangle (resurrected later by the Triangle's forces)
1751[3], left behind to drown inside Poseidon's tomb

"He has no choice; Jack is on land, and going for the Trident."
―The officer to Lieutenant Lesaro on Capitan Salazar[[src]]

This man was a Spanish officer serving under Capitán Armando Salazar aboard the Silent Mary. He followed his captain on hundreds of pirate hunting expeditions, ruthlessly murdering thousands of men with no mercy nor remorse. Eventually, a pirate fleet assembled, with the last ten pirate ships in the Caribbean banding together to make one last stand against the Silent Mary. But, the Silent Mary destroyed every single ship in the fleet, save for one lone vessel, helmed by Captain Jack Sparrow, which was promptly able to send the Mary into the mysterious Devil's Triangle where the ship was blown up along with its crew.[3]

However, the powers of the Triangle were able to bring back the crew as deformed ghostly creatures, determined to gain revenge on Sparrow and finally be freed of their curse. When the Triangle was finally mysteriously destroyed, the ghosts were freed, and set out to find and kill Jack Sparrow. They enlisted the help of Captain Hector Barbossa in their quest, but the latter double-crossed them and set out to find the Trident of Poseidon along with Sparrow. After a brief battle, both Salazar and his crew and Jack and Hector reached Poseidon's Tomb, where they fought for the Trident. Eventually, the Mary crew's curse was lifted, but the walls of water that surrounded the Tomb began to close in and, after a brief attempt to escape, all of Salazar's crew were left behind and perished, drowning in the chaos.[3]

This man was born in the 1700s in Spain to unknown parents. At some unspecified point of his life, he became a member of the crew of the fearsome Silent Mary, serving under the ruthless Capitán Armando Salazar. This officer would be aboard the massive ship during the battle outside the Devil's Triangle between the Mary and a large fleet of pirate ships. He loaded and manned the ship's cannons during the battle along with the other officers and soldiers, eventually destroying all of the pirate vessels. Around nine pirate survivors swam in the water near the Mary, waving a white flag in the air to signify surrender. But, on the order of Salazar and Lieutenant Lesaro, the soldier and the rest of the crew fired their rifles at the survivors, killing them all. He and the others celebrated the defeat of the pirates, but this was soon cut short when they saw one surviving vessel: the Wicked Wench.[3]

After the death of its original captain, Morgan, at the hands of the Silent Mary, the Wicked Wench had gained a new captain; the young Jack Sparrow had assumed command of the pirate vessel, and had acquired Morgan's compass. He climbed atop the Wench's rigging, and yelled to the crew of the Silent Mary that if they surrendered now, he'd spare their lives, before swinging back down onto the main deck. Salazar, angry at Jack mocking his power, ordered the crew to sail after the Wicked Wench. Just as it seemed as though the Wench was about to hide inside the mythical Devil's Triangle, the ship suddenly performed a bootleg turn and escaped. Salazar, left speechless, was unable to give the order to perform a bootleg turn in time, allowing the Mary to sail straight into the dangerous sharp rocks inside the Triangle. This soldier and the rest of the crew were consumed by an explosion caused by the ship's power magazine crashing into the rocks. However, due to the powers of the Triangle, the entire Spanish crew was soon revived, but as horrible ghostly creatures. They stayed inside the Triangle, unable to leave, waiting for unsuspecting victims to enter the cave. As a ghost, the officer had a large hole in place of his stomach.[3]

Not long afterwards, after Jack had sold and therefore betrayed his compass, his worst fear would come true. His worst fear being death, the closest thing to death was Salazar and his crew, so the Triangle soon began to fall apart. Salazar then declared that it was time to hunt a pirate. Not long after being freed, the Silent Mary destroyed the Red Dragon by crushing it, after distracting its crew with their cursed parrots. They would then begin to slowly pick off the large fleet of the famous Captain Hector Barbossa, destroying every one of his ships save for his flagship, the Queen Anne's Revenge. The crew of the Mary boarded the flagship, surrounding and threatening its crew. After a few crewmen were executed, one of them being impaled by this man, Salazar and Barbossa came to an agreement; Barbossa would lead Salazar to Jack by morning, or Salazar would take his life. The crew of the Mary and the remainder of the crew of the Revenge both then boarded the Mary, where the pirates would be forced to work as Barbossa led Salazar to Jack.[3]

The officer was present on the Silent Mary's quarterdeck as Salazar told Barbossa the tale of how Jack Sparrow defeated the Spanish Navy. Right as Salazar finished telling the story, Jack was sighted nearby aboard the Dying Gull. The officer watched as several others dropped the undead sharks of the Silent Mary into the ocean, Salazar telling them to kill Jack, Henry Turner and Carina Smyth. After the sharks failed to kill the trio, the crew of the Mary leapt into the sea and began running on the ocean surface towards Hangman's bay, the island which the three had escaped to. However, the crew had to step backwards when one of their own attempted to walk onto land, only to turn to dust. Unable to step on land, the crew returned to the Mary, where Salazar executed several pirates of the Revenge's crew in anger. Soon, however, another deal was made; Barbossa would go onto land and bring back Jack. But, Barbossa double-crossed Salazar, and he and Jack released the Black Pearl using the Sword of Triton.[3]

They attempted to use the Pearl to find the Trident of Poseidon at Black Rock Island. Salazar, who also needed the Trident to regain his humanity along with his men, followed them. The British Royal Navy ship known as the Essex attacked the Pearl, but soon the Mary appeared and crushed the Navy ship. They then attacked the Pearl. This man was still onboard the Mary as the fight began, staying below deck stationed at a cannon. He tried to fire it at Jack Sparrow, but ended up blowing off the head of the Silent Mary's living figurehead. The Mary soon had to change course as it was about to crash Into the island. He was present as Salazar interrogated Henry Turner. When Salazar attempted to take control of Henry's body, Lesaro warned him that if he did not acquire the Trident, he would be trapped inside the body forever. This officer then told Lesaro that Salazar had no choice, as Jack was on land and going for the Trident. This officer was among the crew when they entered Poseidon's tomb in order to find Carina, Jack and the Trident.[3]

The trident would soon, however, be destroyed by Henry, causing the Spaniards to regain their humanity. They stepped out into the hallway housing the Trident, that was magically suspended in the middle of the ocean. When the walls of water began closing in on them, however, the Spanish crew all ran to the anchor of the Black Pearl. This man, however, was unable to reach the anchor, and was left behind to drown along with almost all of his fellow Spaniards.[3]

The officer, along with the rest of the crew of the Silent Mary, was remembered by Salazar during his final stand as he climbed up the anchor of the Black Pearl. As he pursued Jack, Carina, Henry and Barbossa, Salazar briefly looked back at his loyal followers as he left them behind, but swiftly abandoned them mercilessly and focused on finally gaining his revenge.[3]

This man, along with the rest of the officers, soldiers and sailors of the Silent Mary, was loyal, committed and ever-abiding to his Capitán, blindly following Salazar no matter what. The officer seemed to be reluctant when Salazar ordered the crew to execute the helpless pirate survivors of the Battle off the Devil's Triangle, but followed the Capitán nevertheless likely out of fear. He followed Salazar to great extremes, which ended up costing him his life. But, even in the afterlife, he continued to follow Salazar under the curse of the Devil's Triangle with the promise of redemption and freedom once again. The crew had already accepted that Salazar had been driven to madness in his desire for revenge, but followed him still, having nowhere else to go and longing for their humanity to finally return. However, after being restored to humanity, the crew's loyalty to Salazar cost them their lives once more when they were all left behind by the Capitán to drown within Poseidon's tomb.[3]

The officer used several weapons during his time aboard the Silent Mary, both in life and in death. He was known to have used a musket, which he utilised in executing the survivors of the battle off the Devil's Triangle on Salazar's orders. He also wielded a cutlass, which he commonly used during the afterlife as a ghost. In addition to these weapons, the soldier also served as a cannoneer aboard the Mary.[3]

The officer aboard the Silent Mary. (DMTNT)

The officer and the rest of the crew prepare to fire on the surviving pirates. (DMTNT)

The officer executing a pirate. (DMTNT)

The officer at Hangman's bay. (DMTNT)

The officer about to fire a cannon at Jack Sparrow. (DMTNT) 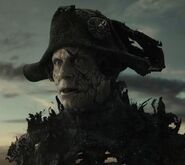 The crew running for the anchor of the Black Pearl in one last attempt to finally be free. (DMTNT)
Cortez, Lopez, Vellido, Raineri.jpg
Nico Cortez on set as the officer with Stephen Lopez, Juan Carlos Vellido and Rupert Raineri.(On-set) 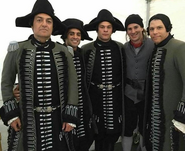 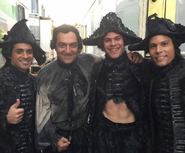