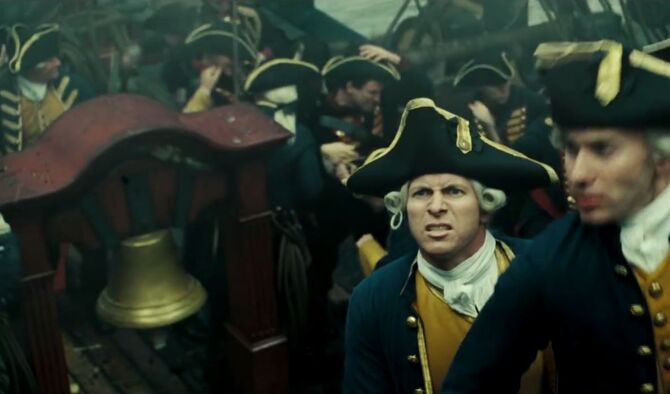 The loyal and devoted crew serving under Lord Cutler Beckett.

The sensible but superstitious merchants who refused to serve the EITC.

The pirates who ruled the seas until a new threat emerged from the Devil's Triangle.

This wiki is mainly for extras and minor characters from the Pirates of the Caribbean films. Every little help is appreciated! Enjoy. 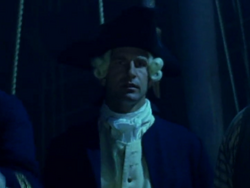 "I'll go out with you and report back to..."
"Lieutenant?"
―The midshipman talks to Gillette before being interrupted by a sailor.[src]

At some unknown point likely in his early life, this man became a midshipman serving in the British Royal Navy. He would be stationed aboard the HMS Dauntless under Commodore James Norrington and Lieutenant Gillette during the search for Elizabeth Swann and William Turner Junior.

As the Dauntless was docked outside the Isla de Muerta waiting for Hector Barbossa's cursed crew of the Black Pearl to come outside so that they could defeat them, this man was talking to Lieutenant Gillette. Unaware of the cursed crew sneaking aboard the ship and slaughtering the guards on the main deck, the Midshipman, Gillette and a sailor spotted a longboat nearby containing two women. However, the women turned out to be disguised pirates, and one of them tried to shoot Gillette in the head. He ended up shooting Gillette's hat right off of his head, inadvertently alerting the Navy of the cursed crew running towards them. The midshipman was immediately grabbed by Maximo and thrown off of the quarterdeck.

Pirates of the Caribbean - Silent Mary vs Monarch
The destruction of the Monarch.

Pirates of the Caribbean At World's End-The Black Pearl and The Flying Dutchman vs Endeavor
The downfall of Lord Cutler Beckett.

Davy Jones releases the kraken
The Kraken's attack on the Edinburgh Trader.
Community content is available under CC-BY-SA unless otherwise noted.
Advertisement