Pirates of the Caribbean Extras Wikia
Register
Don't have an account?
Sign In
Advertisement
in: Males, British Royal Navy, Monarch crew,
and 3 more

"I have no scurvy, but all of you do."
―Henry Turner[src]

Maddox (1716 - 1751) was a stubborn petty officer in the British Royal Navy. Born in 1716[1] in England to unknown parents, Maddox was best known for serving as petty officer aboard the warship known as the Monarch under Captain Toms in 1751. He was still a loyal and devoted officer of the ship's crew in 1751. Eventually, whilst hunting down the Ruddy Rose, a stolen Dutch barque captained by the fearsome pirate Captain Bonnet, the Monarch pursued her prey into the Devil's Triangle. When Henry Turner attempted to change the ship's course by force, warning Captain Toms that the Devil's Triangle was haunted and that ships that went in wouldn't come out, Officer Cole had him arrested and he was taken away by Royal Marines for treason. Afterwards, the ship entered the Devil's Triangle, where they immediately discovered the remains of the Ruddy Rose. Captain Toms soon noticed a shipwreck somehow approaching the Monarch, but the ship soon turned out to be crewed by the undead, full of cursed ghostly Spanish soldiers. The soldiers, lead by Capitán Armando Salazar aboard the Silent Mary, boarded and attacked the Monarch, setting fire to the ship and slaughtering its entire crew including Maddox.[2]

"Faster, you pathetic bilge rats!"
―Maddox to his inferior sailors[src]

Maddox was born in 1716[1] in England to unknown parents. At some unspecified point of his early life, Maddox became a soldier of the British Royal Navy. By the 1750s, Cole had been promoted to a petty officer serving as part of the crew of the warship known as the Monarch under Captain Toms. Along with most of the other officers, Maddox considered the younger British marines serving aboard the Monarch to be inexperienced, superstitious and useless. During their long voyages aboard the Monarch, the whole crew including Maddox had become sick save for the young Henry Turner who had hidden lemons in his pockets which had lead to the rest of the crew suspecting him to be mad.[2]

Pursuit of the Ruddy Rose[]

"This was your last chance, Turner. It it were up to me, I'd string you from the yardarm."
―Maddox to Henry Turner[src]

As the Monarch chased down the stolen pirate Dutch barque known as the Ruddy Rose, Maddox was standing below deck yelling orders at his marines to work faster, harder, and more efficiently. However, the young sailor Henry Turner suddenly ran up to the stairs to the main deck where Maddox stood. The latter asked where he was going, and Henry simply yelled that he needed to speak with the captain, before shoving a baffled Maddox away and clambering onto the main deck where he attempted to talk the captain out of chasing the Rose into the mystical Devil's Triangle. The Triangle was a cave with the powers to bring anyone who died inside back to life, but the officers of the ship simply considered this an old sailor's myth. Captain Toms and Cole humiliated Henry in front of the rest of the crew, and officer Maddox soon appeared from below deck to bring Henry back to work.[2]

But, Henry then tried to change the ship's course by force, running up onto the quarterdeck and beating up the Royal Marines. Maddox tried to chase him onto the quarterdeck, but several other soldiers barged in front of him and blocked his way. Soon, however, by the time Maddox reached the quarterdeck, several soldiers grabbed Henry and restrained him, holding him at gunpoint. Officer Maddox, two soldiers and another officer then dragged him away and took him below deck, where they forcefully tossed him into the brig whilst the Monarch pursued the Ruddy Rose into the Triangle. As they left, Maddox said to Henry that, if it were up to him, he would have strung him from the yardarm.[2]

Inside the Devil's Triangle, Maddox and the two soldiers were still below deck as the rest of the crew looked around in fear as well as fascination from atop the quarterdeck at the massive cavern built up around them. When a supposed shipwreck turned out to be the Silent Mary, which had, long before, been cursed inside the Triangle, the Monarch' crew immediately fired all of their cannons on the Mary, but to no avail; the Mary was cursed, therefore not affected. Unbeknownst to the British, the ghost crew of the Mary had actually already sneaked onto the Monarch while they fired the cannons.[2]

Maddox was still below deck when the sound of blood-curdling screams, frantic running and swords clashing began, and could be heard across the Monarch. The three ran onto the main deck and looked around in fear at the ghosts[2], before two crewmembers suddenly grabbed Maddox[3], flinging him across the air as he screamed loudly. This was witnessed by Captain Toms.[4]

Petty Officer Maddox, along with the rest of the crew of the Monarch, was remembered by the rest of the British Royal Navy, including Lieutenant John Scarfield at Saint Martin.[2]

Maddox was, along with his fellow officers, strict and demanded near impossible work from his inferior soldiers and sailors. Though he was the youngest of the officers aboard the ship, Maddox was a loyal and skilled member of the crew of the Monarch which had earned him his rank of officer, and managed to maintain his position and reputation as being an officer not to be tampered with. However, Maddox showed cowardice when the crew was outnumbered and surrounded by the undead, unkillable ghost crew of the Silent Mary. Instead of aiding his crewmen in courageously fighting back against the seemingly unbeatable Spanish ghosts, Maddox simply stood at the back of the ship[2] until one cursed crewman grabbed him[3] and hurled him across the ship screaming.[4]

As of 1751, Maddox was a fair-skinned man of English descent. He sported blue eyes, and had short brown hair. An officer of the British Royal Navy serving aboard the warship known as the Monarch under Captain Toms, Maddox was commonly seen wearing a blue coat over a white buttoned shirt and white trousers, with a black tricorn hat covering a brown-white wig.[2]

Like all officers of the Navy, he was skilled with a sword and musket. During the battle in the Devil's Triangle, Maddox was unable to hold his own against the Ghost soldiers of the Silent Mary and simply stood at the back of the ship[2] before being grabbed[3] and flung across the ship by two ghosts.[4]

Maddox spent most of his time aboard the Monarch yelling orders to the rest of the crew. (DMTNT) 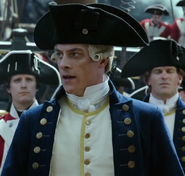 Maddox served as a Petty Officer aboard the warship known as the Monarch in the British Royal Navy in 1751. (DMTNT)

Maddox had taken a particular disliking to Henry Turner, a sailor serving under him aboard the Monarch. (DMTNT)

Maddox was tasked with tossing Henry into the brig after he committed treason. (DMTNT)

Maddox and his associates examined the Devil's Triangle in both fear and fascination as they entered the cave. (DMTNT)

Maddox and two other soldiers reached the main deck after the Monarch's destruction had already begun. (DMTNT)

Maddox was grabbed and killed by two cursed crewmembers during the Monarch's destruction. (DMTNT)