Gregory Kudanovych
This man was an East India Trading Company core soldier serving aboard the HMS Endeavour under Lord Cutler Beckett around 1729.

At some unknown point likely in his early life this man became an officer of the East India Trading Company under Lord Cutler Beckett. He served aboard the HMS Endeavour as an officer. Around 1729, this officer was part of the Endeavour crew during the Company's war against piracy. When the crew boarded the Flying Dutchman, this man was among them.

Later on, many crewmen of the Endeavour boarded the Flying Dutchman under Ian Mercer and assumed command of the vessel. This soldier among others worked alongside the cursed crew of the Dutchman far into the War against piracy. It was during the Battle Around Calypso's maelstrom that the East India Trading Company soldiers worked alongside Davy Jones' cursed sailors to man and fire the ship's cannons on the Black Pearl. Along with all of the other Company soldiers aboard the vessel, this man would meet his end during the battle. 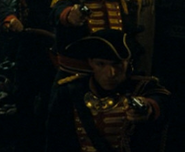 Later on the Dutchman