Pirates of the Caribbean: The Curse of the Black Pearl

Pirates of the Caribbean: The Curse of the Black Pearl

Unknown
This man was a captain serving aboard the HMS Dauntless under Commodore James Norrington of the British Royal Navy.

At some unknown point likely in his early life, this man became a captain serving in the British Royal Navy. He was stationed in Port Royal at Fort Charles around 1728 under Commodore Norrington and Lieutanant Gillette, but was not part of the crew of the HMS Dauntless.

This man attended Norrington's promotion ceremony. During the attack on Port Royal from the Cursed crew of the Black Pearl, this officer ran to the cannons along with Commodore Norrington and the other soldiers. He would survive the attack, along with much of the other marines.

During the pirate Captain Jack Sparrow's hanging, this man was patrolling the fort. However, Jack soon escaped with the help of William Turner. This captain and many others surrounded the two, pointing their rifles at the two. They watched as Elizabeth Swann and William Turner stood up for Jack, and as Jack ended up falling off of Fort Charles. The marines and everyone else present were all surprised to hear that they would not be pursuing Jack. They then began heading back inside the fort. This man's further fate is unknown. 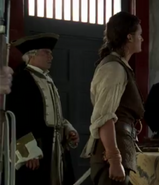 The Captain wih Will